We specialize in migrating critical networks, particularly analog voted radio systems and broadcast applications from legacy copper-based circuits to modern IP-based solutions. This allows better reliability as well as significant cost savings. Our product does this by taking the audio signal and converting it to Ethernet packets. Utilizing a TDM over packet based technology, the signal is reconstituted at the other end exactly the way it was transmitted initially, with no distortion or attenuation, thus providing a "perfect wire" connection. This creates a seamless migration to an Ethernet network that is completely transparent to the user.

A typical radio system in a simulcast voting network. Using a TC3846-6 at each of the remote sites, 4W from these sites are converted and sent back to dispatch through a packet-based network, then converted back to 4W to communicate with the voter and dispatch console. A single card at dispatch can communicate with up to 4 remote locations.

JumboSwitch® allows you to seamlessly integrate analog devices over an existing or new IP/MPLS or Carrier Ethernet backbone. Our products allow you to connect 4-wire E&M and 2-wire 600 ohm analog circuits between the remote repeater or voting receiver sites to the central voting and dispatch site. 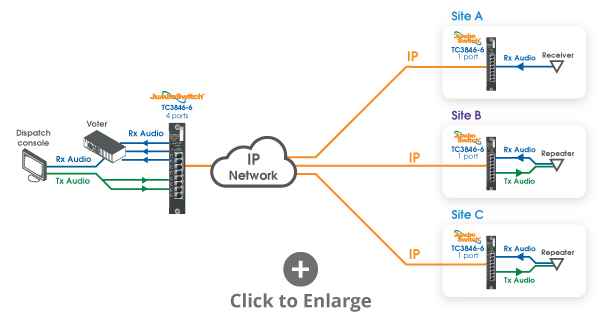 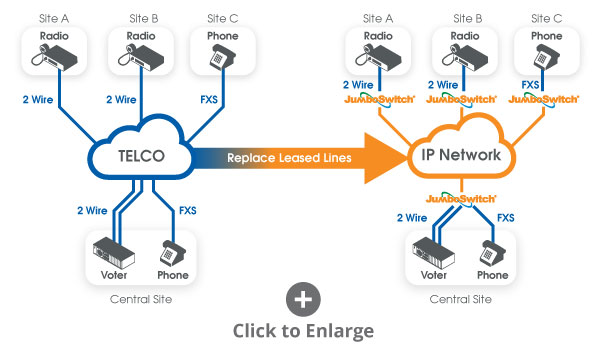 Broadcasting in a campus security or Public Address (PA) network

The TC3846-6 can take 1 input and broadcast by cloning the signal over its other open ports, ideal for PA networks that are looking to migrate their transport to a packet-based network.

The solution can be expanded to work for many analog devices including radio, and master/slave SCADA systems, as well as alarm dry contacts. 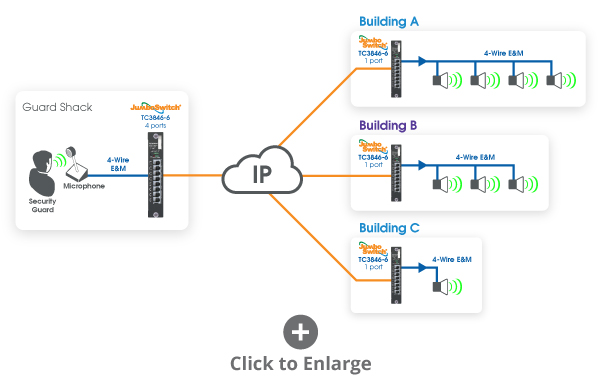 Analog or digital radios over a T1/E1 network

As carriers retire their leased lines, some are offering a T1 line as a replacement. Moving from a dedicated line to a backhauled network can be essential for customers that need high reliability and resiliency like Public safety agencies.

In this simulcast radio system with dispatch and voter, the leased 4-wire lines were discontinued and the carrier offered T1 lines as a replacement. The TC8614 4-wire over T1 multiplexer was inserted at each end, seamlessly

In some cases, an Ethernet connection is not available and T1 lines are offered as an alternative. T1 lines are generally available in much of the US and are a cost-effective solution for linking radio sites. As a typical digital radio system uses less than 40kb/s per channel, you can connect multiple repeaters at a site to a single T1. 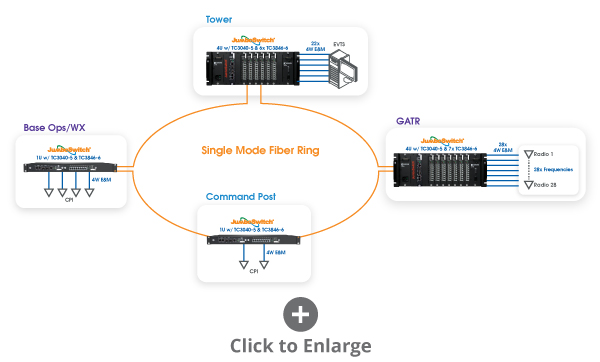 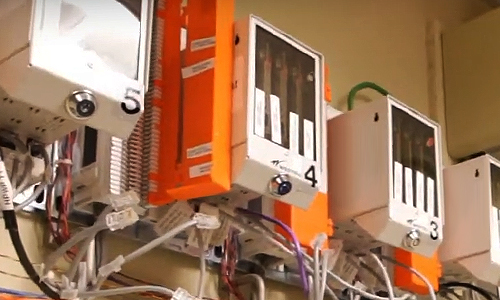 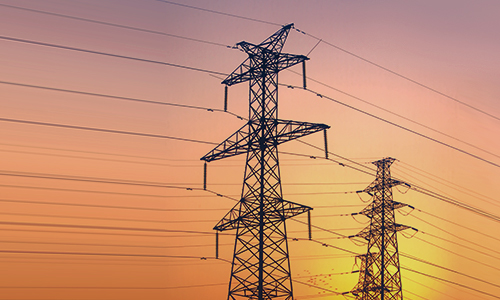 With the availability of telco leased lines facing an uncertain future, power utility network managers are looking at alternative tools and transmission mediums for communications transport.

Watch the video about the East Shore Radio Project

"Over the past thirty-five years I have used similar boxes from other vendors for similar applications. But I have never seen one that would produce such a linear, uniform audio transmission from one end to the other - especially across an IP link."

In addition to analog radios many public safety networks rely on analog voters to monitor multiple remote sites and select the receiver with the best audio quality. Migration for an entirely analog system would require a complete equipment overhaul and training.

As an alternative TC Communications offers an interim, cost-effective, easy to deploy solution that will help network managers migrate their analog radios and voting comparators to an IP network in an easy, secure fashion while maintaining audio quality where other products may fail. Our analog over IP products have been deployed and proven in some of the harshest environments in the world.

Q: Why is TDM over IP important?

Voice is a time critical application.

In traditional transmission of data, if packets get delayed or lost, they can be reinserted into the received data when they arrive or are resent. With voice however if the received audio is to be intelligible, then packets need to be received in a manner that allows them to be used in the right time and in the right order.

Since Ethernet was designed for the transmission of data, there is no standard-defined way to transport an analog signal over a packet-based network, so TC Communications has developed an industry-leading solution based on TDM (Time division Multiplexing) over IP technology. This solution has particular benefits, especially when used with voters and Simulcast systems, because these audio characteristics are a key requirement when moving from a legacy copper circuit to a modern IP network.

TDM over Ethernet/IP is a technology where it emulates Time Division Multiplexing over a packet switched network. TDM over Ethernet/IP takes a real-time bit stream and packetizes it. When combined with a special clock recovery scheme called Adaptive Clock Recovery (ACR), this solution provides a low-latency, reliable solution for clear Analog audio and tones over an IP network.

As a result, TDM-over-packet transported analog voice data is identical to a conventional Telco's 600 ohm leased copper line. The E&M signaling that forms an important part of the connection of many radio systems is catered for by "mirroring" the signaling at the interface and transporting this signaling information across the network as part of the management packets that are transmitted with the TDM over IP packets. This technology has been widely used for many years and is robust and reliable.


Q: How is it different from SIP and VoIP?

VoIP, will result in compression of the audio. This impacts the intelligibility of the audio and affects the control tones when they are passed. Additionally there is no defined way to pass E&M signaling without control tones, so systems that require these may not use a VoIP based solution.

VoIP also does not provide a consistent latency across the network. Latency is critical for the operation of bot voted systems and Simulcast systems. The TDM-over-IP based solution provided by TC Communications provides consistent latency and no audio compression thus making it the perfect choice for replacing existing copper lines.


Q: I have a voted radio system. Why is clarity and passing tones so important?

VoIP will often compress the audio signal. This compression is optimized around the frequencies of the human voice and while this is acceptable for the intelligibility of the spoken audio, this can have a disastrous effect on the control tones used to control the radio network. These control tones are usually outside the common voice frequencies and as such will be often significantly attenuated by the compression resulting in either unreliable or non-existent operation of the control functions. "Many systems using VoIP or other digital formats utilize a tone detection and regeneration mechanism which introduces both phase and time delays into the system and may cause integration issues."2

"Past experience with 'Ethernet radio boxes' has demonstrated issues sending EIA tone signaling from one end to the other. When the audio is compressed the control tones are often distorted causing problems with the decoders. The compression can also cause changes in levels that interfere with the decoder's ability to properly distinguish between the function and guard tones. Likewise the same compression can affect the quality and levels of paging tones sent by the console. This can lead to problems with the pagers and handheld radios used by the various volunteer fire departments. The need for consistent audio levels and quality become more stringent with the advent of narrow-band audio requirements."1

1. Technical review of a bench test for a Fire Department network